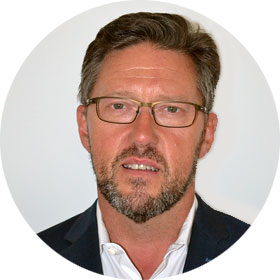 Pascal Delporte was born on July 16, 1964 in Gembloux (Belgium), and he has not always been active in real estate.

On the other hand, he stood out from the start for his vision and aptitude for entrepreneurship. As soon as he got his degree (industrial engineer at ECAM, promotion 1986), he went to work for various companies with the conviction that he would be managing his own company in the short or medium term.

His first acquisition was a car dealership. This was in 1990 and it had little to do with a franchise. The dealership did not own the premises it occupied, so if it could not purchase those premises, the first goal was to find and buy the area it needed for the first phase of expansion of the company. This was achieved in 1992 with the acquisition of a first building, located in Wavre, very quickly followed by the opening of a second point of sale in Genval.

In 1995, Pascal Delporte bought out his partner and became the sole decision taker. In the process, he resold the building in Wavre to acquire a new building that doubled the size of the working area. In 2002, a third point of sale, located in Waterloo, was acquired with the same objective: owning the real estate infrastructure in the short / medium term. This was when his fascination with real estate really took hold.

In 2005, he made his first 100% promotional real estate investment.

In 2010, he terminated his car dealership (the manufacturer he represented was in great financial difficulty and was taken over by a multinational that dismissed all European dealers) and could concentrate exclusively on real estate, which proved to be his passion. Since 2010, his company Immo D3, specialized in real estate investment, promotion and development, has made investments for concrete projects from 10 to 100 units of housing and shops, both in Belgium and abroad.